Take Back The Pivot

I did an ignite talk at the World's Best Meetup Group on Wednesday night. It was insanely fun and I love the NYC lean community. Here are a few slides and the gist of what I shared...

"Pivots" are everywhere and that's a problem. Misuse/overuse of the term threatens to turn this extraordinarily valuable concept into meaningless buzzword.

While there are bang up definitions out there (see @dbinetti 's here), pivots for me are about adopting a mindset that failure is the most likely outcome of any new initiative. It's about knowing that my initial idea for any creative venture is probably wrong and doing it anyway, with the belief that the right path will emerge.

This mindset may be common in the valley, but it is a new way of working in NYC (and part of why NY tech is booming right now).

When we expect failure, we can design it into how we work. If we begin by asking ourselves, "What would we do differently if we assumed you we'd fail?," we'd be more focused on the things that matter. The alternative is to cling to an idea for as long as possible out of fear of being proven wrong. 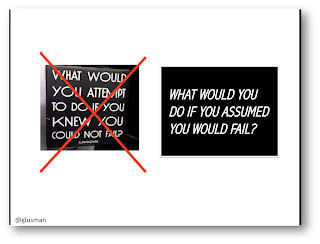 Over the years I've learned that 95% of new creative initiatives do, in fact, fail. With disciplined customer development the failure rate can drop to 90%. 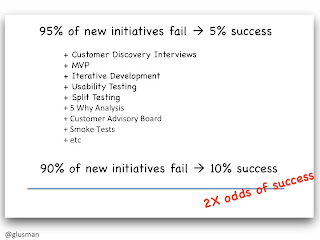 That's a 2x success rate. If I could double odds of winning in Vegas, I'd probably get booted from every casino. That's great, except one little problem....

The most likely outcome is still failure.

So with a 90% failure rate, the real upside comes from getting in multiple trials. We could jump from venture to venture but that simply ups the trials without meaningfully improving success rates. Instead I believe that we can leverage the learning from each failure to up the odds of the next one. That is the power of the pivot... 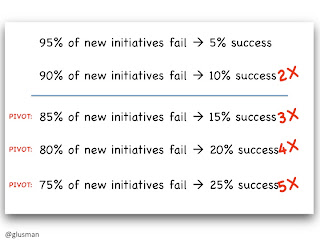 Pivots change the mindset. And that makes a huge difference. When we as a community talk about pivots, we share stories of failure and lessons learned. We get smarter, more flexible, and ultimately more successful.

I'm finally getting around to posting this slide share here.... 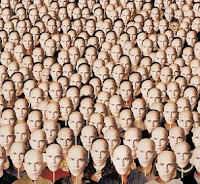 In a team setting, usability testing shakes the Malkovich Bias in profound ways. User testing shifts the debate. If a team witnesses a user struggle through something, everyone has a shared experience and understanding of that user's experience which serves as the starting point of the discussion and the eventual solution.
Posted by - - - - - - - - - - - - - - - - - - at 9:41 AM 3 comments: